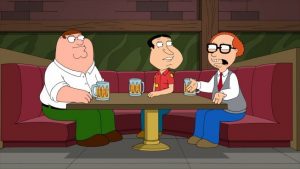 There were three guys talking in the pub. Two of them are talking about the amount of control they have over their wives, while the third remains quiet.

After a while one of the first two turns to the third and says, “Well, what about you, what sort of control do you have over your wife?”

The third fellow says, “I’ll tell you. Just the other night my wife came to me on her hands and knees.”

The first two guys were amazed. “What happened then?” they asked. “She said, ‘get out from under the bed and fight like a man’.”