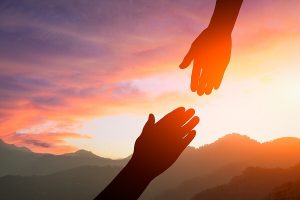 Once there was a small boy named Shankar. He belonged to a poor family. One day, he was crossing through the forest carrying some woods. He saw an old man who was very hungry. Shankar wanted to give him some food, but he did not have food for his own. So he continued on his way. On his way, he saw a deer who was very thirsty. He wanted to give him some water, but he did not have water for himself. So he went on his way ahead.

However, one day Shankar fell down the hill. He was in pain but he couldn’t move and no one was there to help him. But, the old man who he had helped before saw him, he quickly came and pulled him up the hill. He had many wounds on his legs. The deer whom shankar had given water saw his wounds and quickly went to the forest and brought some herbs. After some time his wounds were covered. All were very happy that they were able to help each other.

Moral: If you help others, then they will also help you.

Late In The Evening

Late in the evening I was walking in the park. Suddenly I heard scream coming from behind bushes. I stopped to listen and understood that a woman was attacked. I heard sounds of fighting and muttering. For several moments I was hesitating, should I get involved? I panicked. I was frightened for my own safety. […]

Mother’s Love for a Son

One day Thomas Edison came home and gave a paper to his mother. He told her, “My teacher gave this paper to me and told me to only give it to my mother.” His mother’s eyes were tearful as she read the letter out loud to her child, “Your son is a genius. This school […]

A Man with a Lamp

Before I marry Sarah