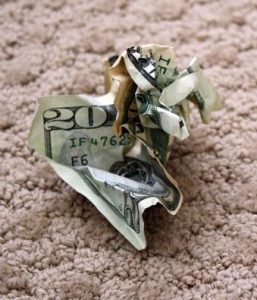 A popular speaker started off a seminar by holding up a $20 bill. A crowd of 200 had gathered to hear him speak. He asked, “Who would like this $20 bill?”

He then asked, “Who still wants it?”

All 200 hands were still raised.

“Well,” he replied, “What if I do this?” Then he dropped the bill on the ground and stomped on it with his shoes.

He picked it up, and showed it to the crowd. The bill was all crumpled and dirty.

“Now who still wants it?”

All the hands still went up.

“My friends, I have just showed you a very important lesson. No matter what I did to the money, you still wanted it because it did not decrease in value. It was still worth $20. Many times in our lives, life crumples us and grinds us into the dirt. We make bad decisions or deal with poor circumstances. We feel worthless. But no matter what has happened or what will happen, you will never lose your value. You are special – Don’t ever forget it!

A water bearer in India had two large pots, each hung on the ends of a pole which he carried across his neck. One of the pots had a crack in it,while the other pot was perfect and always delivered a full portion of water. At the end of the long walk from the stream […]

This is a real Christmas miracle story, happened in December 1997 in Wisconsin, USA. A little girl named Sarah had leukemia and was not expected to live to see Christmas. Her brother and grandmother went to the mall to ask Mark Lenonard who was a professional Santa Claus to visit the hospital to give Sarah […]

The important things in life

A philosophy professor stood before his class with some items on the table in front of him. When the class began, wordlessly he picked up a very large and empty mayonnaise jar and proceeded to fill it with rocks, about 2 inches in diameter. He then asked the students if the jar was full. They […]

Everyone Has a Story in Life

A Man with a Lamp

Experience at the airport